The story behind Brimstone, our British-grown, thermally-modified timber

It’s the first thermally-modified timber made from British grown hardwoods, a high quality timber cladding with a low environmental impact.

Brimstone demonstrates that locally grown trees can become high performance timber products. Thermal modification transforms some of our most abundant but underused timbers – like poplar, sycamore and ash – into a beautiful and durable timber cladding. 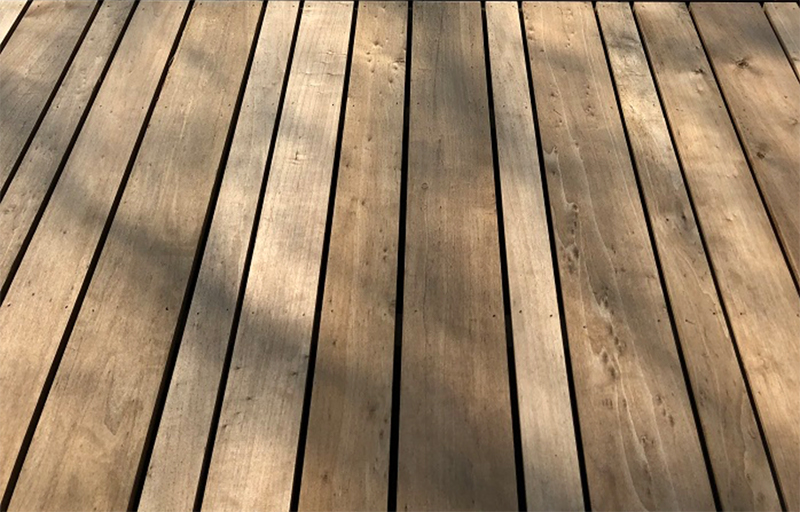 Since launching this innovative thermally-modified timber (TMT) we’ve delivered over 30,000 square metres of Brimstone ash, poplar and sycamore into some fantastic buildings, including award winning homes and commercial projects.

It’s hard to pick favourites, but there are a few that we particularly enjoyed being involved with. These buildings range from historic to contemporary, and affordable to high-end. 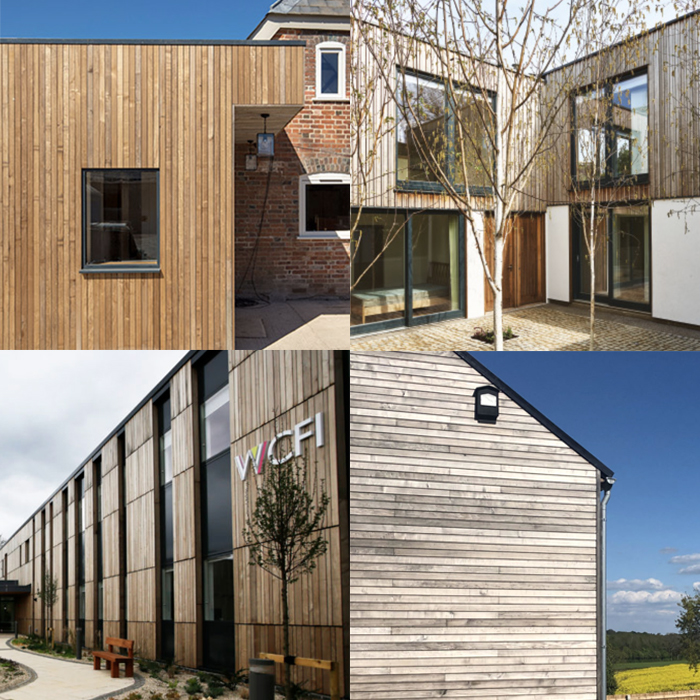 The wide range of designs and project types persuades us that there is indeed a significant demand for Brimstone.

Here’s some highlights of the Brimstone story, so far…

The concept behind Brimstone originated in 2014, at a meeting hosted by Grown in Britain where Vastern Timber, BRE, Timber Strategies and others came together to discuss potential solutions to the poor state of native broadleaf woodlands.

The demise of the UK furniture trade had left most native hardwood species, including sycamore, ash, beech and poplar out of fashion and out of demand. As a result there was little incentive for landowners to manage the woodlands.

The consensus was that the best way to get woodlands back into management was to stimulate demand for the wood growing within them.

From many weird and wonderful ideas, emerged the concept of modifying wood to change its structure and improve its performance. Dr Ed Suttie of BRE was tasked with writing a feasibility report into the modification of British timber. The report, published later in 2014, recommended modification as a potential route to add value to British white hardwoods and specifically favoured thermal modification as the most flexible and cost effective method to transform the wood.

Following the BRE report we at Vastern Timber decided to take the initiative. Thermal modification technology had been developed and perfected in Scandinavia since the 1960’s and many countries were already applying the technology to hardwoods including ash.

A lot of data already existed demonstrating the superior durability and stability of thermally modified wood. There was very little left to prove, we just had to find a way to modify the wood. As luck would have it a French company had recently built a large thermal modification plant and had extra capacity.

Not really knowing what to expect we produced some ash planks and sent them over to be modified. Back came some dark brown wood with a smoky smell. 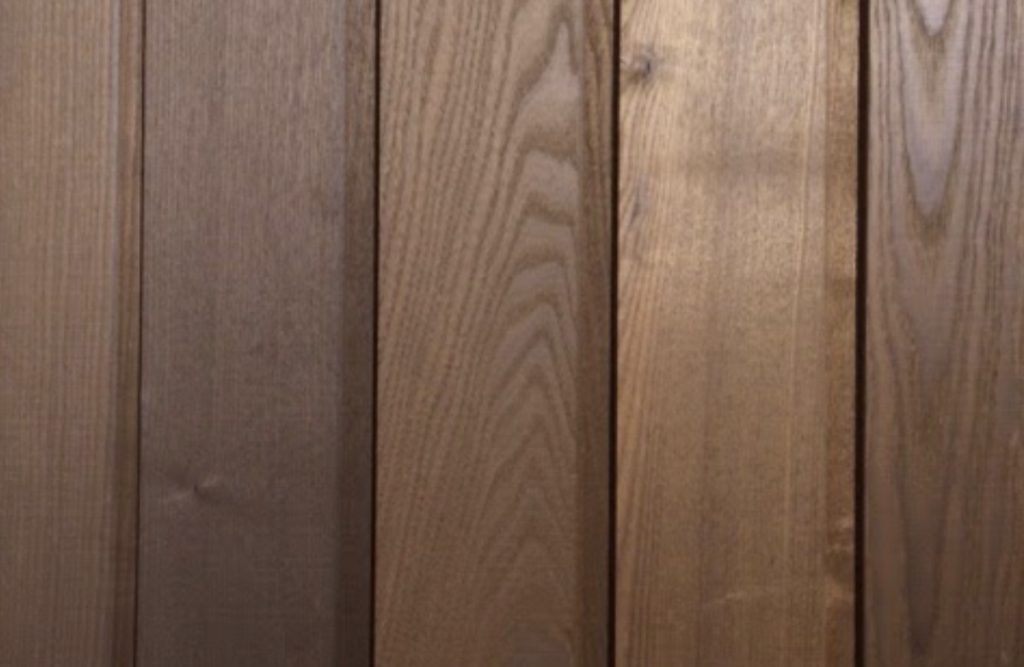 What do we call it?

Towards the end of 2015 we had a ‘thermally modified British hardwood’ to take to market, but this didn’t seem like the most catchy of product names so we set about creating a brand name.

We wanted something that would set it apart from other imported versions and hopefully capture people’s imagination. After trying in vain to come up with a name we employed the services of Mytton Williams, a design and branding agency based in Bath.

Out of a selection of names we settled on the name ‘Brimstone’, which is the name of a butterfly that lives in English woodlands and nicely conjures up ‘thermal’ images of Fire and Brimstone. 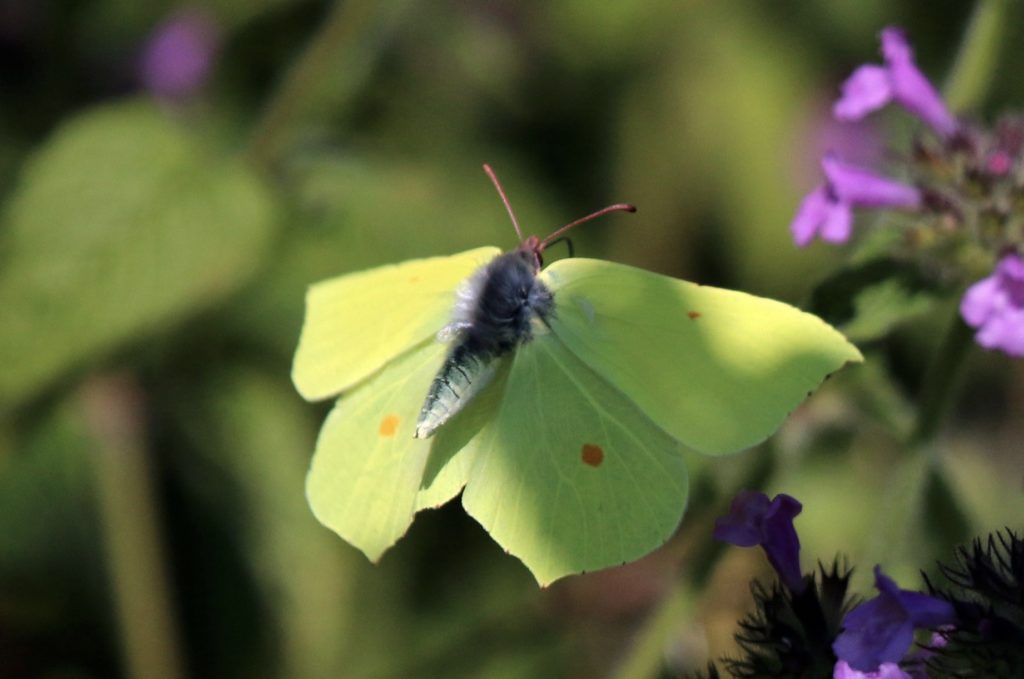 As Brimstone is produced from British grown wood and will be used in British buildings, we thought that it was only right that it should be accredited by the only British third party certification body.

In the same way that FSC and PEFC certify good forest management around the world, so GIB does so in the UK. GIB certification assures those using Brimstone that it has come from a well-managed wood in Great Britain.

We were proud to be one of the first companies to receive the GIB chain of custody certification. 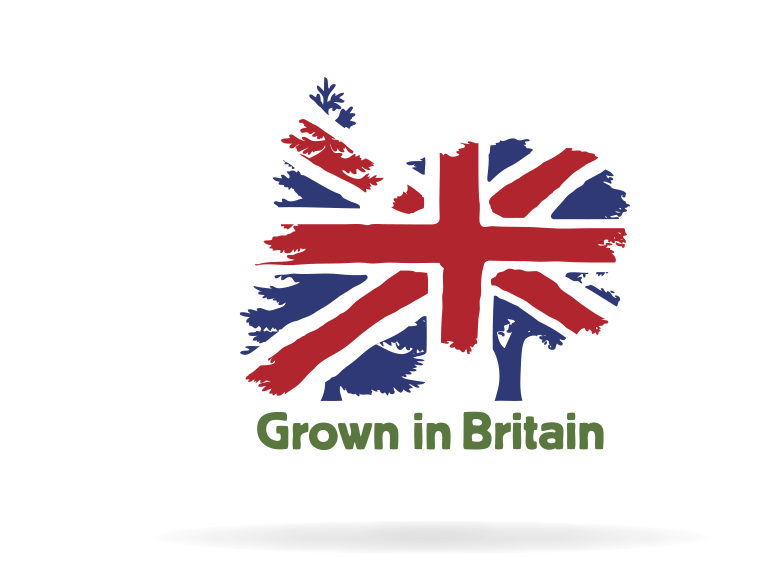 In February 2016, we officially launched Brimstone the EcoBuild show in London. Billed as the first thermally modified British hardwood we focused on the sustainability credentials of using locally grown wood for local building projects.

At this stage we were half expecting some bright spark to waltz up to the stand and give us a reason as to why Brimstone would not be a success but, we received nothing but interest and enthusiasm for what we were trying to achieve.

We were delighted to be nominated in the TRADA sponsored timber innovation category at the TTJ awards. We were even more delighted when we won. TRADA were also quietly delighted that they could award the prize to a British grown timber product.

Although a lot of test data exists for thermally modified wood we felt that it was important to have Brimstone tested independently. To this end we sent our thermally modified ash, poplar and sycamore to EPH in Germany, a lab with many years of experience of testing modified timber products.

The three types were tested for a range of physical properties including strength and stability as well as for durability, the test that determines how quickly fungus will eat the wood when left outside.

As expected the tests showed that the thermal modification process results in some loss of strength but the benefits were quite staggering. The modified wood was significantly more stable than the raw timber and the durability rating was improved from non-durable (Class 5) to very durable (Class 1). 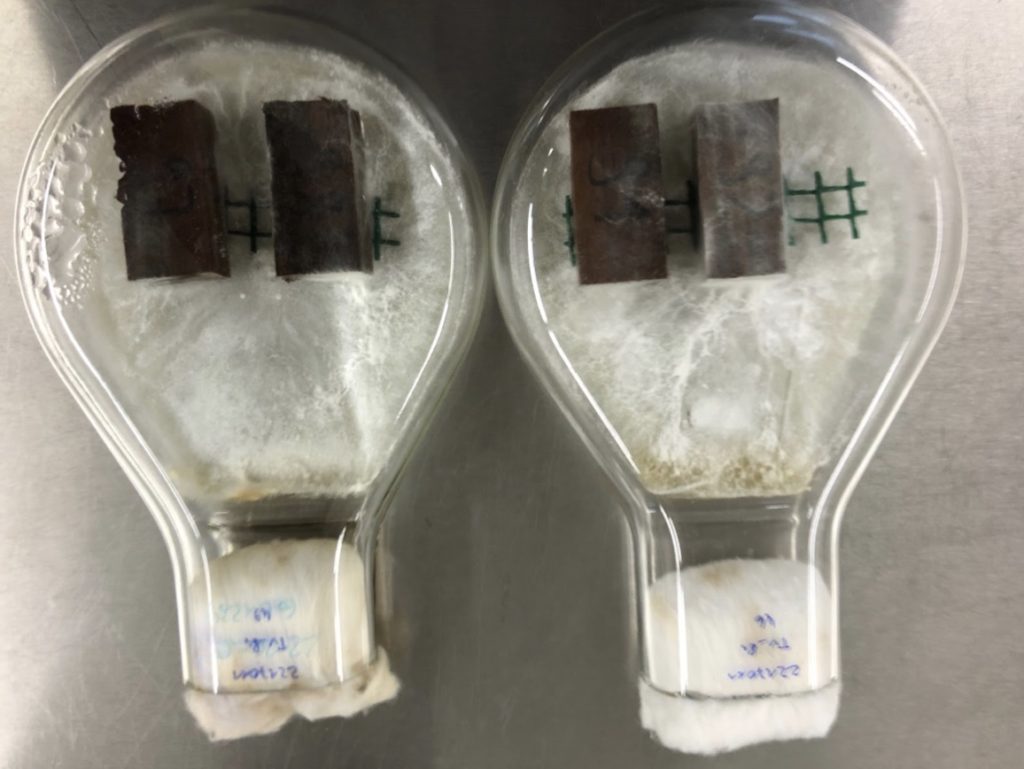 2018: Forestry Commission support, and the Wood Centre for Innovation

We were overjoyed to win a £50,000 grant from  the Forestry Commission to carry out further research and development on the Brimstone products. With the grant money we commissioned an Environmental product declaration (EPD) and life cycle analysis from sustainability consultant Thinkstep. We also built a ‘weathering station’ for Brimstone, which we use to show how the material responds to the great British weather. 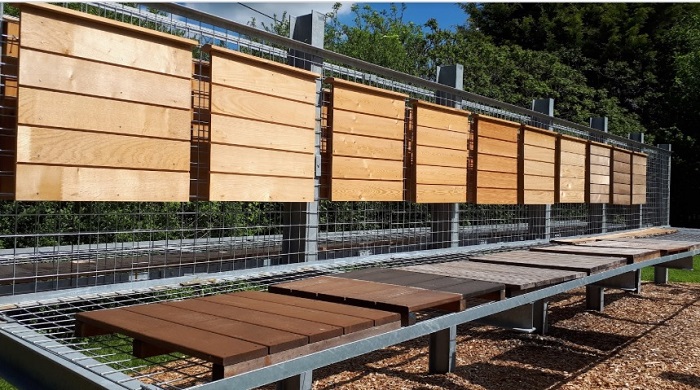 Also in 2018, Brimstone poplar was chosen to clad the The Wood Centre for Innovation in Oxford.

This award winning centre for education and innovation was the biggest project to date using Brimstone, and another fantastic showcase for locally grown, thermally modified timber. 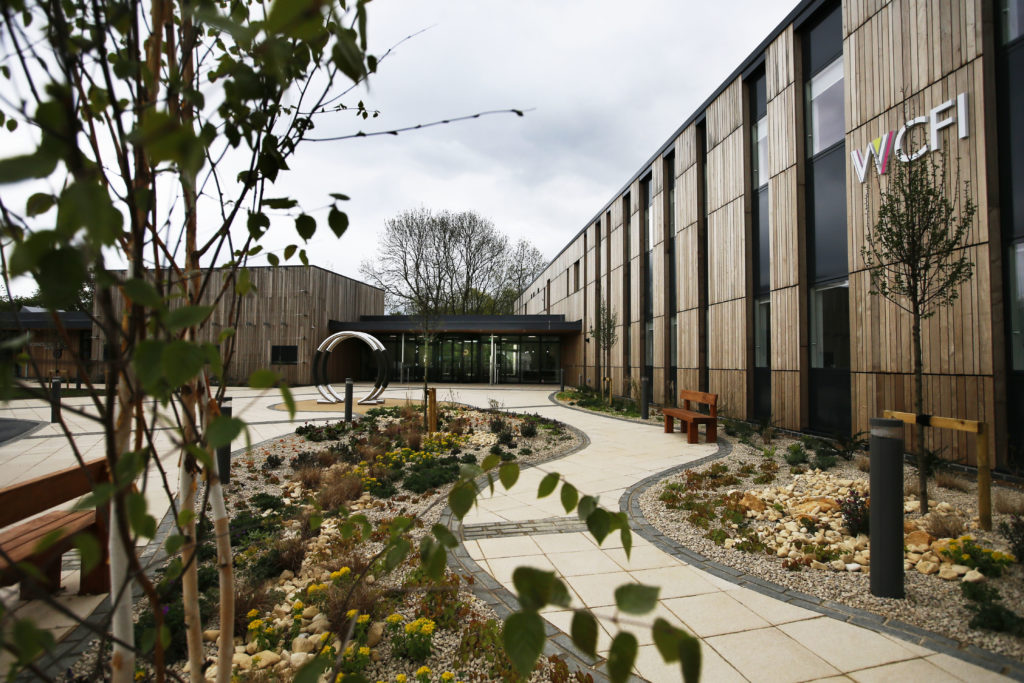 In 2019, we published a detailed life cycle analysis of the environmental impact of producing Brimstone. The Environmental Product Declaration (EPD) was an extensive process, which involves modelling the life-cycle of Brimstone, all the way from the sapling to the eventual disposal of the product at the end of it’s useful life. 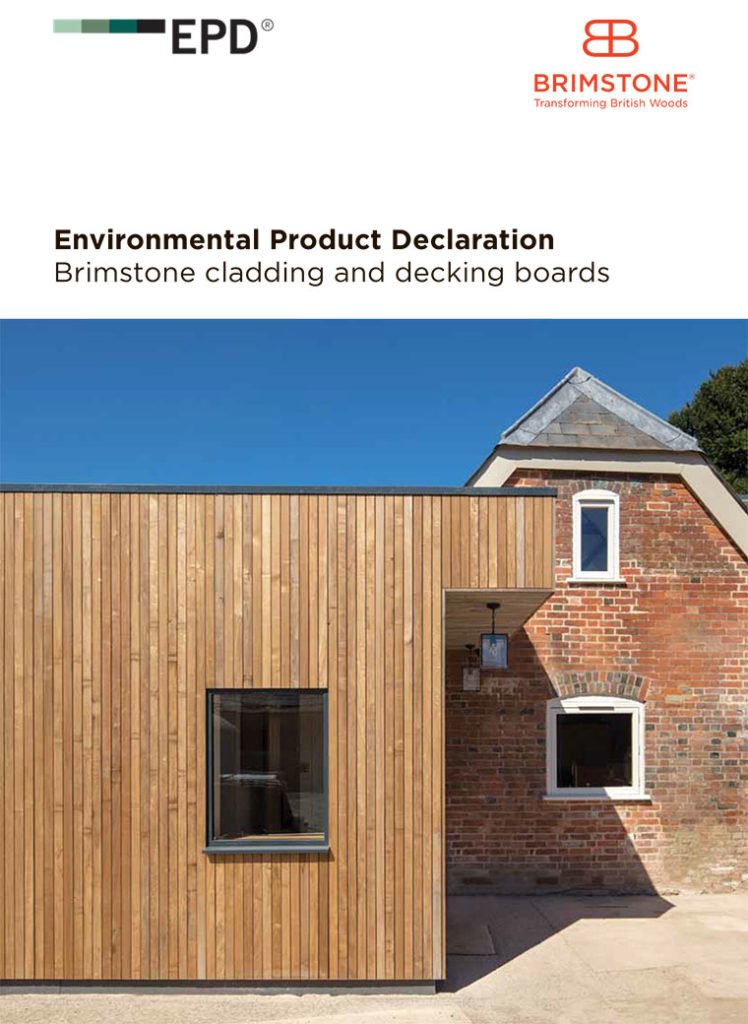 We worked with consultants thinkstep to ensure the process consistently followed the correct standards. We needed to ensure that the analysis of Brimstone was rigorous so it could be compared on a like-for-like basis with other EPD’s.

We learned a lot, and we published lots of supplemental information to help architects and specifiers make sense of the numbers.

And perhaps most importantly, we discovered potential to further reduce the carbon footprint of the Brimstone production process.

We supplied over 100 m2 of Brimstone to the Sylva Centre, a charitable organisation which aims to help Britain’s trees and woodlands thrive.

Renovating an old grain store at their base in Oxfordshire has provided a vast new space for their work, supporting woodworking businesses, innovation and skills training. It’s been transformed into a ‘cathedral of making.’

The project was another stunning showcase for British TMT, and we can’t wait to see what new timber products and woodworking innovations emerge from this workspace. It is the first commercial building to include joinery made of Brimstone ash, which was made in the UK by George Barnsdale.

It is critically important to use more locally grown woods – and this was the key factor behind developing Brimstone.

By using intense heat to reconfigure British hardwoods, we produce a durable, stable and consistent material. And by using locally grown timbers, we increase demand for local species, support rural jobs and reduce the environmental impact of global transportation of materials.

As a locally sourced, low impact and renewable product we’re convinced that Brimstone can play a key part in a low carbon local building industry, while at the same time supporting the renewal of our local woodlands.

We also think it’s rather beautiful. 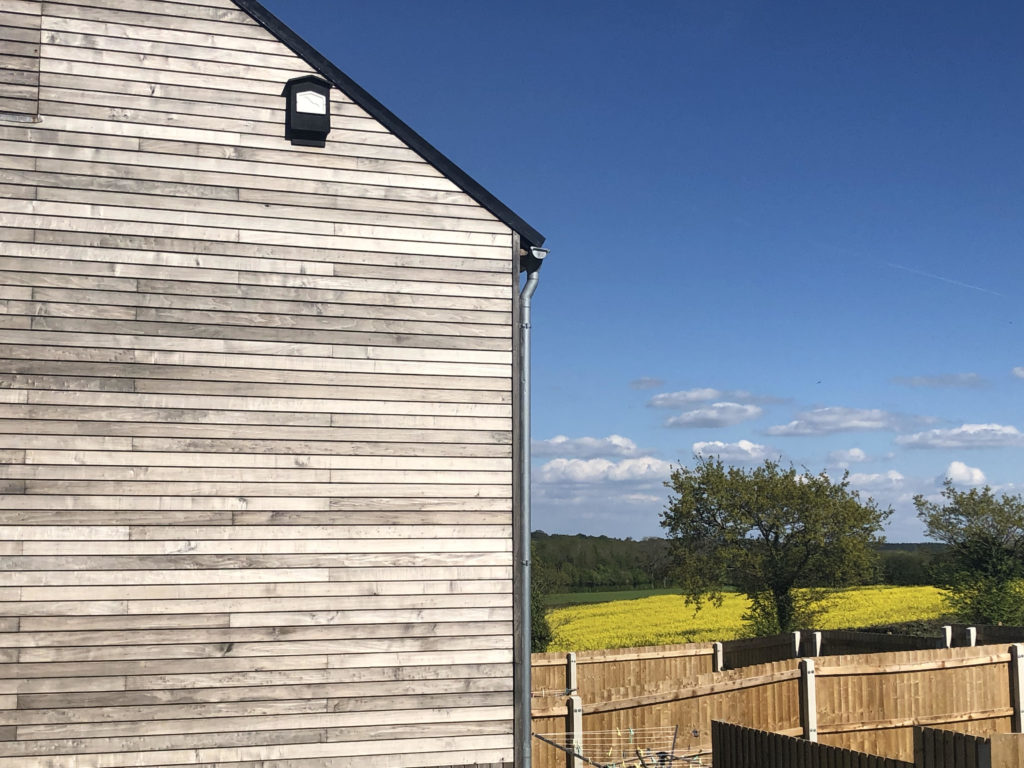 Visit our overview page for more information on the Brimstone range

Or contact our friendly team to find out more.