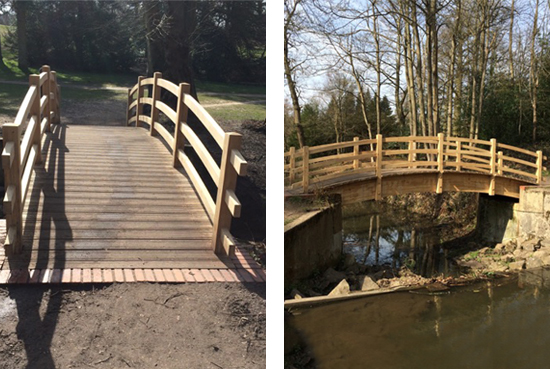 At Vastern Timber we have been pleased to make our own small contribution to British history with two recent projects in Windsor Great Park.

Windsor Great Park is one of the most historically significant areas of land in the country. Its royal connections date back a thousand years: from the time when William the Conqueror used the landscape as a deer hunting ground to the days of Queen Victoria entertaining on the shores of Virginia Water, right up to its present status as a Royal Park open to the public and managed by the Crown Estate.

Now Vastern Timber are delighted to have contributed to an attractive new feature of the park: an ornamental – but also practical – curved footbridge, set across an inlet to the spectacular Virginia Water lake.

The bridge is made from English oak supplied by Vastern Timber and was built by specialist carpentry and joinery company Kenneth Rayson & Sons. It has an undercarriage consisting of two curved oak beams constructed from a series of oak boards, which have been finger jointed together to achieve the length and then laminated for the curved form. Prime air dried English oak planks have been cut to make both the handrail and posts, while the actual decking of the footbridge was produced from green English oak with Gripdeck anti-slip inserts fitted for safety.

The project continues Vastern Timber’s ongoing association with Windsor Great Park. Over the years we have sourced English oak and Douglas fir logs from Crown Estate land, and we recently supplied bespoke cedar cladding for a large building designed for storing and selling the park’s famous Christmas trees. The new footbridge is a beautiful addition to the many attractions of the Royal Park, which we hope will be enjoyed by generations of visitors to come.

Meanwhile, we were delighted to see a rather special piece of timber starring in the 90th birthday celebrations of Her Majesty Queen Elizabeth II. On 21 April 2016, just outside Windsor Castle and not far away from our new bridge in the Royal Park, the Queen lit a ceremonial beacon: the first of more than 900 across the UK. The beacon itself consisted of a brazier, which was set on top of a tall oak post… supplied, of course, by Vastern Timber!