British larch cladding is both tough and durable, making it ideal for exposed elevations and areas where knocks and scrapes are likely. Larch is also our most cost effective cladding option.

British larch is a completely different specie to Siberian larch and they look very different. It is important that you are clear about which version you are asking for.

Although we sell most of our larch in wet sawn profiles such as feather-edge, British grown larch can also be dried and machined to various cladding profiles. Our dried larch cladding is either available in a relatively clean Grade A or a cheaper but more knotty grade B. The grading is very similar to that of Siberian larch.

For a comparison between British and Siberian larch watch our video.

Call us to discuss your project

Appearance
British larch ranges in colour from pinky-brown in the heartwood, to creamy-white in the sap band. Depending on the grade, there will be some or many dark brown knots and occasional resin pockets along the length of the board.

Weathering
British larch weathers relatively slowly, often taking two years to reach a silver-grey patina. Larch is quite consistent and is not reactive, and as such, will weather relatively evenly. Northerly elevations may weather to a darker grey than those facing South.

Working properties
Good workability. Takes fixings satisfactorily although can be prone to splitting.

Extractives
British larch contains resin rather than oil or tannin.

How to fix
Pre-drill and hand nail with stainless steel nails through the face. Do not attempt to secret nail through the tongue. We do not recommend first fix nail guns because the nails are unsightly but the method does work. ** Be sure to leave an expansion gap between machined boards**

When to fix
Ideally autumn and winter months.

We machine timber cladding to the profile of your choice. View our full range of cladding profiles

We recommend the following profiles for British larch. 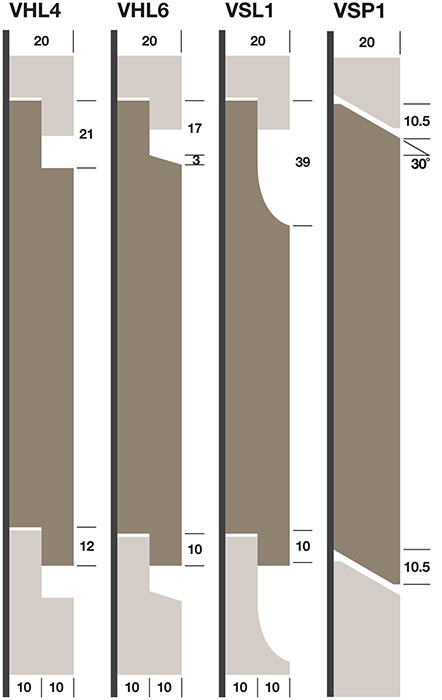 While the utmost care has been taken to provide accurate information, Vastern Timber shall not be held responsible for any consequences arising from any errors or omissions on this website nor for any damages resulting from the use of the information.

Not sure if Larch is for you? Have a look at our other Timber Cladding options.