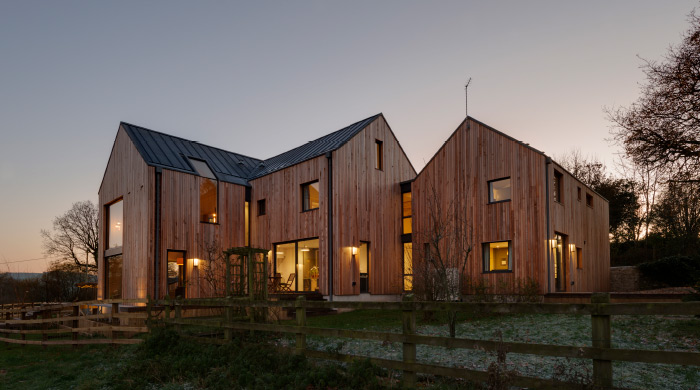 The design features cedar cladding and a pitched zinc roof. A projecting stone clad porch provides an entrance feature to the front elevation. Camillin Denny Design are comfortable using cladding in their designs, and for Powers House they chose Western Red cedar from Vastern Timber for the external cladding; specifically 95mm x 20mm boards with halflap detail, and 145 x 20mm reveal boards. For the extensive decking around the building they chose Brimstone ash. As Mark Camillin of Camillin Denny Design explains

"We've used cedar previously because we love the way it looks and the way it gradually fades. We wanted the building to be fully clad and we chose a narrower 95mm halflap board to give us the texture of the shadow gap between the boards. We used Brimstone® Ash for the decking. It's a nice board because it turns grey very quickly. It makes a nice change from green softwood boards that don't really last." 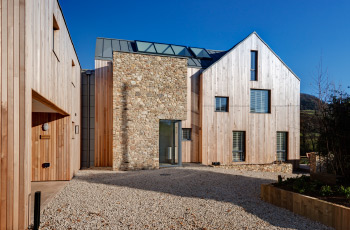 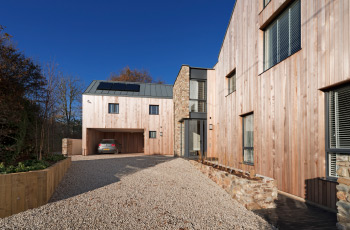 The Canadian cedar used on Powers House is lightweight and offers good stability and Class 2 durability. The timber is imported with PEFC certification to give independent assurance that it is sourced from a forest managed to sustainable principles.

"We are increasingly interested in using timber cladding alongside other materials, for example the zinc and stone on Powers House. The brown flint field stone contrasts and complements the western red cedar cladding, while the grey zinc standing seam panels vertically on the walls and the roof works really well next to the timber cladding."

Launched early in 2016, Brimstone thermally modified range not only offers superior levels of sustainability as it is manufactured from locally grown hardwoods, but also superior performance. Brimstone is more stable than non-modified timbers, delivering significantly less expansion and contraction when faced with changes in ambient temperature and humidity. Thermal modification also improves the durability of the wood, allowing it to be used outside with, or without treatment. Brimstone is Grown In Britain certified and supports better local woodland management. We look forward to working with Mark and Liam again in the future. 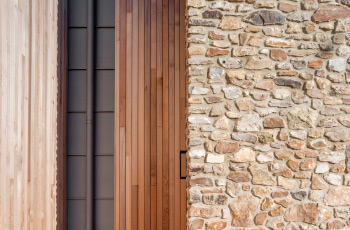 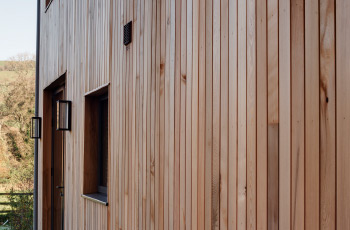